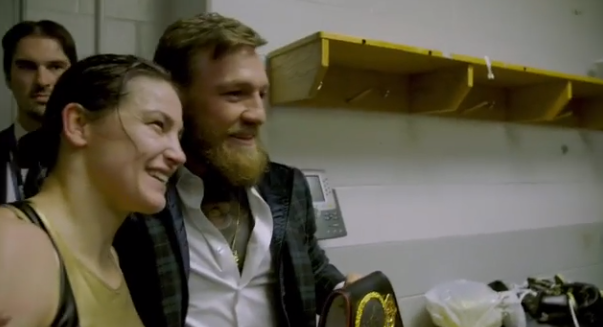 Katie Taylor has retained her world boxing title as she defeated her American opponent Cindy Serrano in Boston last night.

The Bray woman added another accolade to her already glittering career, and fans across Ireland and the world were quick to show their appreciation for the remarkable sports star.

One of these fans included Irish MMA star Conor McGregor, who was sitting front row to support his fellow country woman.

The Notorious uploaded a video of himself watching the fight, and visiting Katie after the impressive win.

“This is my first time watching you live and I’m very excited.” The Dubliner said.

“You are a credit to our country, know that we’re all with you.

Conor also shared a tribute to the Irish boxing legend before the fight, saying it was an ‘honour’ to get to watch her in action.

Katie, who will be savouring her victory today, has spoken about her frayed working relationship with her dad Pete Taylor, in the trailer for her new movie, Katie.