Electric Picnic is returning for the first time in three years, so naturally there is plenty of excitement. But even more so considering how star-studded this year’s lineup is.

But they might not be the only A-lister in attendance, as it seems another famous face might be appearing, not on stage, but in the crowd.

Friends’ star Courtney Cox is in Ireland at the moment, having been spotted in Co. Down during the week.

Courtney was there to attend a special Snow Patrol gig, in honour of lead singer singer Gary Lightbody being awarded the freedom of the borough. With Courtney’s boyfriend being bandmember Johnny McDaid.

She has been joining the band for a few of their gigs as they travel for performances.

But seen as Court is here, and Snow Patrol is playing EP, hopefully we will get to see the actress donning a pair of wellies in Co. Laois, to support her beau as he takes the Main Stage on Sunday night.

The couple began dating in 2013 but called off their plans to wed in 2015 when they broke up for several months.

Now the couple has been back together for almost seven years but has no plans to get engaged again.

“Isn’t that strange? We broke off our engagement and he moved to England, then we got back together, and it’s actually better than it was before. Everything is better,” the mother of one told Ellen DeGeneres.

“Not because he’s in London, although the distance after that breakup – we were apart for six months – that really showed us a lot, and it’s just better.” 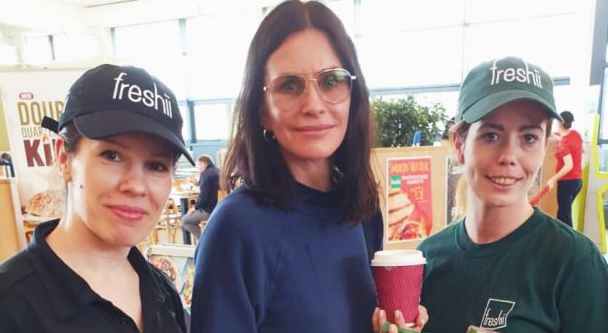