When one meets a very posh person, one might assume that conversation will revolve around champagne, caviar and all things fabulous, darling. Not with Made in Chelsea’s Louise Thompson, though.

The pint-sized reality star, fondly known as P.O.R.G on the show (Person of Restricted Height), stresses that unlike co-star Mark Francis, who constantly has a glass of bubbly in hand, she is very much “a normal girl.”

“On an average evening, I order a takeaway and watch some Netflix,” she told us. “That’s what I do most days. I like to spend time with people away from the show – otherwise I’d go crazy!”

VIP met Louise in Residence while she was on a flying visit to Dublin yesterday, and she was clearly feeling the effects of jet-lag, having just returned from a 2-month stint in LA – where the new series of MIC will be set.

How was her latest American experience, we ask her (the cast filmed in New York before, where she met long-term boyfriend Alik) – and what can we expect from the new season!?

“LA was amazing – it feels like it never happened though, it’s a complete blur,” she told us. “It’ll probably come back to me in a week and I’ll start missing it. I made a home of it – I was living in a house with the girls and went for breakfast in the same place every day, I became a local!

“There are a couple of new people, who are really good. I can’t wait to see them on camera. The trailer is out and looks awesome – and the new people are very attractive, which is a bonus.”

But isn’t it annoying, as part of the original cast, having fresh meat – such as Ireland’s Nicola Hughes – constantly jumping on board as of late?

“You’re always a bit sceptical, but maybe I’m a bit quick to judge… I am quite friendly, but it must be quite nerve-wrecking for them. If I was to do that now, to come into a group of people who were already friends, I’d be useless at it,” she said.

And although she is just back from the Los Angeles sun, could the MIC cast ever come over to film in Dublin?

“That’d be cool, yeah! We always want to travel on the show as much as we can, but it’s obviously expensive and we have limited time. I’d love us to come to Dublin,” she said.

“I have friends over here who have houses in the countryside and stuff. There’s lots to see here and it’s beautiful – but the weather is the same as England. There’s Guinness though!”

Louise also admitted to us that she’s a self-confessed home-bird, but with her American boyfriend being tied to his business in NYC, she may consider the big move across the pond.

The smitten couple, are currently doing long-distance but the 25-year-old says she’s definitely considering uprooting herself. And the gorgeous tv star, who has been linked to 1D member Niall Horan in the past, says dating Alik is totally different to her previous Irish and English boyfriends.

“I never thought I’d date an American – I just didn’t think I’d mesh well with American people. When I first met him I thought he was really obnoxious and loud, and we weren’t going to get on at all, and then we just fell for each other,” she smiled. “We went on some amazing dates – including Interpretive Theatre and a festival in Central Park – and now…well who knows, I might get a green card!”

Louise is no stranger to boyfriends on the E4 show – she’s dated four of the best-known characters. But how has she coped with filming with someone who has cheated on her and broke her heart? (We’re naming no names. Spencer Matthews.)

“It was the worst! I didn’t get through it very well,” she admitted. “I was literally upset and crying in every scene which was really humiliating. But everytime you go through a break up, you learn more about how to cope with it. The first one, it was really bad but it does get easier.”

And during her time on the show – Louise has been a castmember since series 2 (we’re now on series 10) – her popularity with viewers has been very much up and down – which of course was documented on Twitter. Is it not awful reading the abusive messages from complete strangers?

“It peaked, annoyingly for me, when I was dating Spencer and made terrible decisions. The AMOUNT of abuse I got was terrible. It went from 10% bad and 90% nice to 10% nice and 90% bad,” she said. “People are fickle. They might not think I read them, but I’m not going to lie, I read every comment. It makes you tougher – but it never changed me drastically. It didn’t even change my decisions – I still didn’t break up with him!”

Louise will be returning to Ireland again in September, when she dons her festival threads for Stradbally’s Electric Picnic. She was in Dublin yesterday to launch the Just Eat Retreat at the festival, which will feature a nail bar, face painting, mindful meditation and phone charging. Just Eat are also offering 10 pairs of VIP weekends tickets – click here for deets.

So will she get stuck in and embrace the muck or go for a more ‘glamping’ vibe when she heads to Laois? “I’ll be doing both,” she laughs. “I will be getting stuck into the muck, but it’s nice to have the option to do both!”

We can’t wait to see her boho attire – if her outfit from yesterday was anything to go by, we’re in for some serious festival inspo! 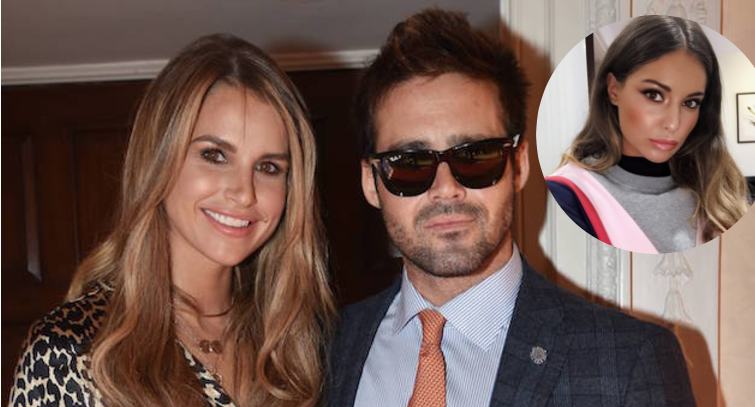 “I dodged that bullet,” Spencer Matthews’ ex on his engagement to Vogue Williams