It appears that investigative journalist Donal MacIntyre’s marriage is in crisis after his wife Ameera accused him of being unfaithful in a furious post on her Facebook profile.

Ameera, who has been married to the Dubliner since 2006, reportedly took to her FB page to call him “a lying cheating scumbag”.

“How could you ruin this family???” the caption continued underneath a picture of Donal and the couple’s three children, Allegra, Hunter and Tiger-Lily.

The Sun reported that dozens of her friends then comforted the tv producer and agent, with one asking: ‘How could someone do this? Is there no hope?’

Donal’s Twitter account has since been deleted, with his wife confirming this to a pal of his.

A user named Ellie Monteith wrote: ”Is ”DonalMacIntyre OK?His twitter account has gone. He’s an old friend of mine(Juliette Sutton) Hope he got my DM. Hope all ok (sic).”

A spokesman for the journalist said: ‘We won’t be making any further comment. It is of course a difficult time for the family and everyone close is giving the best support to both Donal and Ameera.’

The former Dancing on Ice star spoke to Hello! magazine about his wife when they unveiled youngest child Hunter to the world, saying “I feel so lucky for everything I have.”

They pair met in an airport in January 2006 and got engaged just over a month later on Valentine’s Day. Despite planning to move to Dubai for work, the new romance changed Ameera’s mind and she stayed put.

They later had a civil ceremony in London, a ceremony in Dubai, a Muslim blessing in Malaysia in homage to Ameera’s heritage, and a lavish ceremony in Slane Castle, Co Meath, which was splashed across five pages of Hello! magazine.

He previously told the Irish Independent: “Ameera and I produce and present together. We’re very tight, we lead a wonderfully privileged life, we’re loving our beautiful children; we’re an absolute team.”

Donal MacIntyre’s wife Ameera opens up about the recent cheating scandal: “It was more than my wifely intuition.” 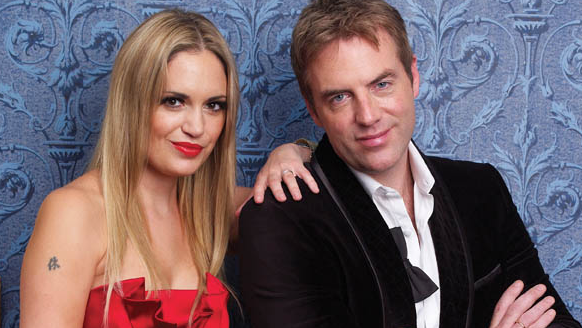 When VIP met Donal and Ameera MacIntyre in happier times