The podcast hosts took to Instagram to directly address their recent controversial post after releasing an initial apology statement.

The Two Johnnies came under fire this week after a clip appeared on their social media that caused quite a stir.

The since deleted clip showed the lads discussing car stickers that their podcast listeners sent in. The stickers contained slogans that read, “Tyres are like women, no good unless they are squealing” while another said, “She’s not a princess, she’s a sl*t”.

Followers were less than impressed with these quotes being discussed.

In a new video posted to their Instagram page John O’Brien and John McMahon, addressed the clip and shared their apologies for any offence caused.

John O’Brien said, “We wanted to come on and talk to you about the last few days, about our podcast, and the reaction to it.

“We condemned them in our own language, saying ‘these are scandalous’, ‘these are too far’, ‘who thinks these are a good idea?’, but we did not go far enough and we were not clear enough in our condemnation, and for that, we are sorry.

“If you have these on your car, talk to the women in your life about your car stickers, are they too far, if your mate has them, pull him for a chat.”

John McMahon continued, “Yeah on the social media video that went up, which just showed the stickers, it didn’t show the discussion around it, we want to say sorry for causing offence.

“It was made by a member of our team but it’s our channel and our responsibility and we stand over that and we just want to say we’re sorry for causing offence.”

John O’Brien said, “As soon as we saw the video we took it down, and 2fm had no involvement in the video.They did not approve of it and were not aware of its existence until it was taken down. In the caption it said something like ‘check out The 2 Johnnies new radio show 3-6pm’, that was our mistake.” 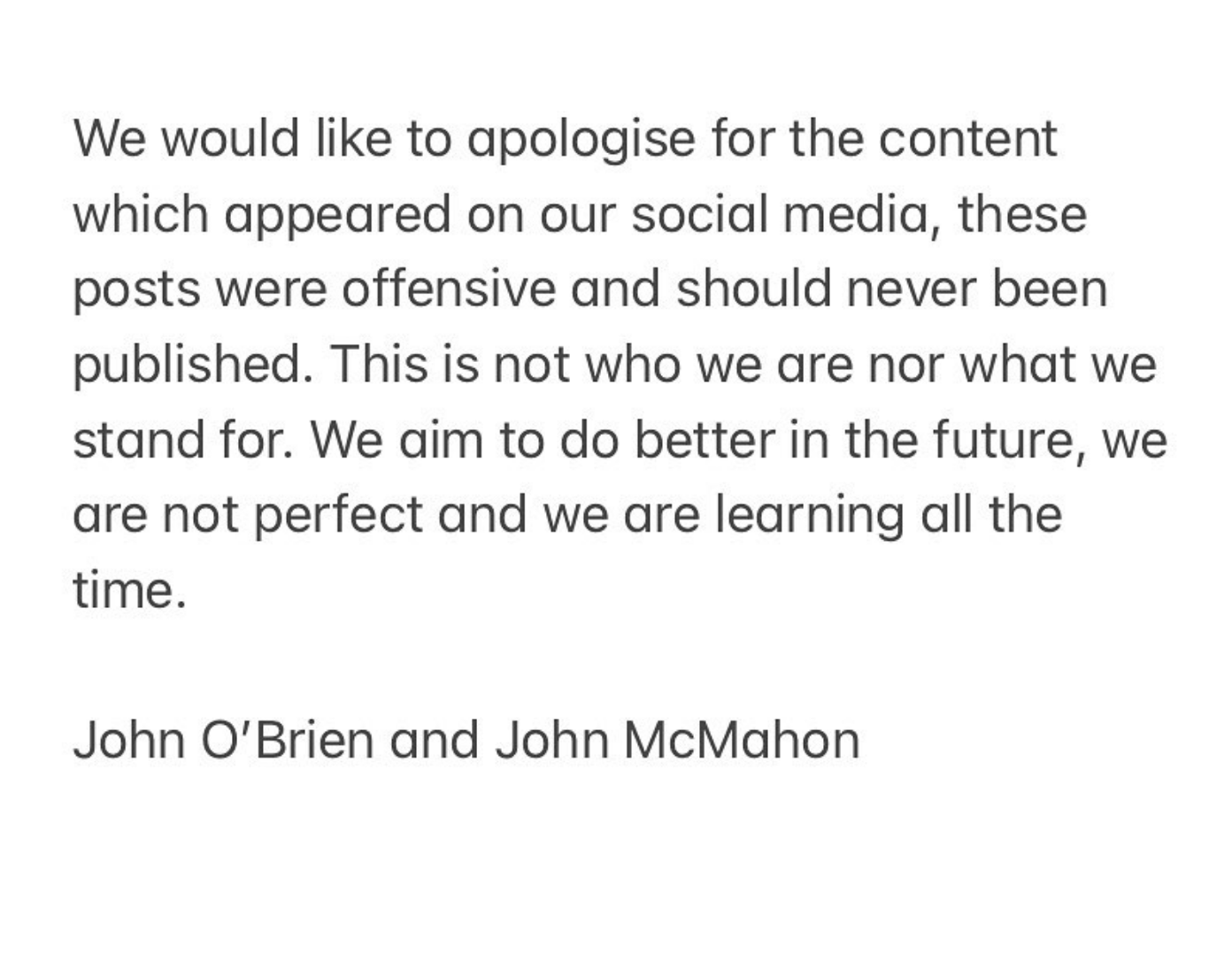 The pair also explained that they try to cover important topics on their podcast and that they get it wrong sometimes. They said they would continue to record their podcast but wanted to “represent [their listeners] better.”

They also urged followers to “go easy on each other online and in the comment section.”

Friends of the presenters showed support in the comments section with Roz Purcell and Jennifer Zamparelli sharing love heart emojis.