Síle Seoige has taken to her Instagram to share messages she received from a troll, before telling them to unfollow her.

The TG4 star shared with her followers on her Instagram Stories how she was keeping a pregnancy diary, as she is currently expecting her second child.

Síle and her partner Damien O’Farrell are soon to welcome baby number two, and are already parents to their four-year-old son Cathal.

On her Instagram Stories, Síle shared: “I’m in a fresh pair of jammies, it’s bank holiday Monday. I’ve had a lovely lazy day. Now I have got dressed and left the house, just not for long. Just taking a bit of time out to write in my pregnancy journal.

“I’m not as good as I was when I kept one when I was pregnant with Cathal but anyway it’s nice to write in it and keep an account of how I’m feeling, how I’m doing, all that kind of stuff.

“Because before we know it we’ll have another little addition in the house.”

Later, Síle decided to call out a troll who had sent her an unkind message following her Stories.

She wrote: “99% of messages here on Instagram are lovely. But there will always be a few that are not so lovely. I don’t like using the block button but for your own mental wellbeing sometimes it’s needed.

“To those who send mean/bitchy messages. Why bother? Just unfollow me or anyone else if they annoy you.

“It’ll be better for you and for the person you are directing your judgement at.”

Síle then shared a screenshot of the message, wondering why she bothered this person so much. The message read:

“Sile.. you really don’t need a pregnancy diary… You have documented every day of this pregnancy on Insta. What are you going to focus on when this pregnancy is over? How interested have you been in all your pals’ pregnancies?” 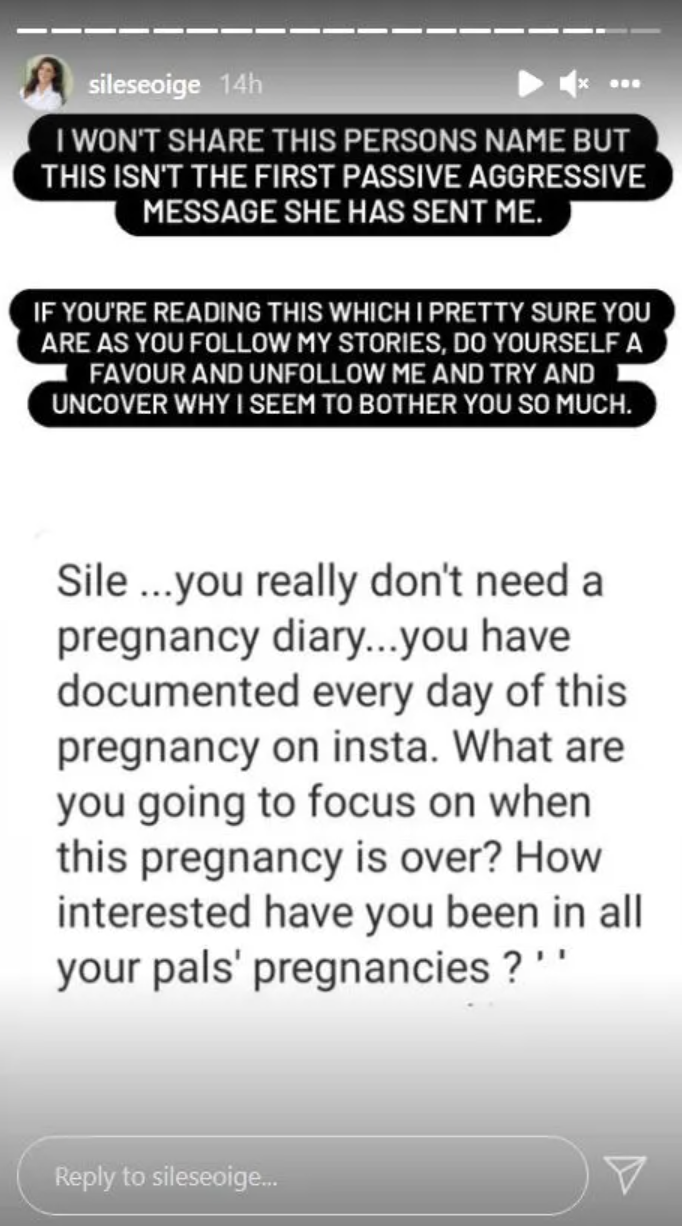 The presenter then wrote: “I won’t share this person’s name but this isn’t the first passive aggressive message she has sent me.

“If you’re reading this, which I’m pretty sure you are as you follow my stories, do yourself a favour and unfollow me and try and uncover why I seem to bother you so much.”

“I just had a quick scan of my DMs there. I’m so sorry I can’t get back to everyone individually but you really are such a sound bunch. I am totally grand. I mean that.

“But I do think we are all entitled to say no to inappropriate comments. I hope that person heals the part of her that felt the need to send those messages, as it’s more of a reflection on her own stuff than it is mine.