Presenter Laura Whitmore has made her much-anticipated West End debut.

Starring in ‘2:22 – A Ghost Story’, Laura is taking on the role of Jenny staring alongside Busted singer Matt Willis, Felix Scott and Tamsin Carroll.

Sharing a reel that shows her making her way to the theatre for opening night. Laura nervously says:

“Well, the sign says it’s on tonight. So I guess it’s happening tonight”

Friends and fans flocked to the comments section to share their well-wishes with the Bray native.

While another friend of Laura’s, and Irish journalist Samantha Barry said:

“Good luck !!! You will be phenomenal”

Laura then went on to share some BTS action on her Instagram stories, showing her makeup transformation to get into the character of Jenny.

When the show was over and the curtain was drawn Laura posted to again to say how well opening night went for the cast and crew. 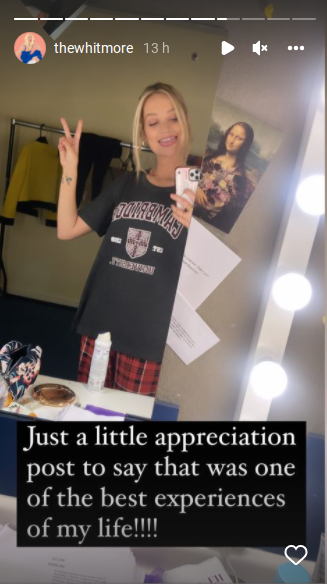 “Just a little appreciation post to say that was one of the best experiences of my life!!” she wrote.

Running for a limited time in London, the play’s synopsis reads:

“Jenny believes her new home is haunted, but her husband Sam isn’t having any of it. They argue with their first dinner guests, old friend Lauren and new partner Ben. Can the dead really walk again?

“Belief and scepticism clash, but something feels strange and frightening, and that something is getting closer. So they’re going to stay up until 2:22….and then they’ll know.”