Conor McGregor has revealed that he is already training his young son for a career in sports.

The MMA champ was speaking at a Q&A in Glasgow during An Evening With Conor McGregor.

When asked about Conor Jr who is just five months old, the fighter revealed he has high hopes for his son!

McGregor explained that he feels that sport is highly beneficial.

“I have a son now. When he grows up I’m going to put him into sport. I believe sport is the best thing you can do.”

He added that he even already has the baby in training and that he is proving to be a determined little fella!

“I’ve already begun training him. He’s already leaps and bounds ahead of schedule.”

“He’s only five months old. He can stand balance on his feet. I have this little method where I have him doing a squat.”

The 29-year-old added that he wanted to start him young so that he is more prepared in the future.

“I’ve been doing little things like that and that’s from the bell, from day one. It’s like a blank canvas.”

“I think I’m going to raise a special special young boy whose going to go on and achieve great things. I’m very excited about that.”

Conor added that he will not put pressure on his little boy to follow his footsteps, but wants him to be prepared in he does plan on it.

“Like I said I’m going to put him into training, sport, fighting. I’m not going to push him into fighting. If he wants to fight that’s great. If not it’s his own decision but he will be skilled in how to fight.”

With a dad like Conor and all this early prep, we reckon the little one could be a massive star! 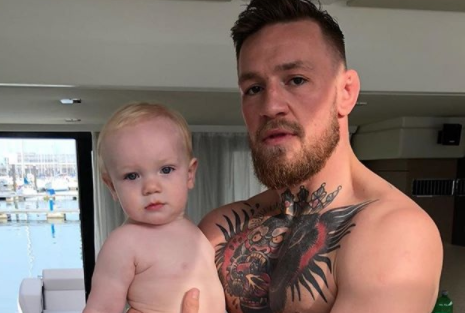