On my way to The Mayson hotel, in Dublin’s docklands, for a long overdue chat with the bestselling cookery writer, teacher and TV chef based at the world-famous Ballymaloe Cookery School, I keep thinking about chicken soup. In Rachel’s new book, which is a bible on soups and broths and breads, Rachel writes about how bone broth, or her chicken stock, is one of the most important recipes and not just because of it’s apparent restorative properties. I can’t but help think that after the turbulent couple of years the Allen’s have had since their eldest boy Joshua was charged and served time for drug offences, that there’s been a lot of chicken soup on the hob, at their lovely family home at Ballynamona, Shanagarry, Co. Cork.

We talk about her first book in six years, about optimism, sea swimming, the importance of friends and Christmas at the Allen’s. She’s a diamond, Rachel. I like her so much.

How are you Rachel? It’s been ages…
It has been so long…did my last cookbook really come out in 2015? Six years ago? Wow…

How have you been coping with it all?
It’s been, of course, tough and trying. But I think I’ve been really good at finding ways to seek out the positive and make myself feel better. Perspective has been employed too. I remind myself that everyone is healthy and that there are people in worse situations. I have a loving family, I’ve great girlfriends and I’ve great fun with them whether we’re sea swimming or drinking cocktails. One of my closest friends is going through breast cancer and has been really ill and when I see how amazing she is, it doesn’t feel right to go around moping.

Life is complicated and we all get thrown curve balls. And – dare we say it – the curve balls come more frequently when kids get bigger and bolder!
Bigger kids, bigger problems!

Be it from illness, grief, relationship breakdowns or challenging children, all of us have to actively find ways to support ourselves…how have you?
Well, I have a great support group of friends. But for me it’s also been about finding balance and about starting the day off with a swim. I know I’m the biggest cliche going [laughing] but I started sea swimming when my dad died two-and-half-years ago and when everything else was also going on at home. My sister and my friend decided I needed to get into the water and so I went along with it and so began this daily ritual which has become my everything. I bring coffee or tea and afterwards we sit and chat and laugh.

Are you a quick dip-in-and-out or do you tough it out?
I tough it out but only because it’s amazing. And when there’s been a full moon I’ll take a bit of extra time in the water and I’ll always ask the universe to look after everyone. Then I feel ready for the day. I feel like I can face anything.

Isn’t it amazing how we do find inner strength when we need it most?
Absolutely, but then I haven’t dealt with ill health. Ill health is a big deal; I hope that the other things we can overcome.

What was lockdown like? Who had you at home?
Everybody was home for a period of time. Josh wasn’t home for a bit of it, and then he came home and that was really special and really lovely.

You have a full house at the minute because Lucca is also back from Japan where he has been training, racing and engineering on his quest to become a Formula 1 racing driver.
Yeah, Lucca is home at the moment. He may go back in February but it’s all dependant on sponsorship.

Joshua, has had his struggles, but he’s doing really well at the minute training and competing in Mixed Martial Arts (MMA) and also working on his stone carving. He has always been so creative. I remember driving up your driveway and being blown away by his graffiti art on the exterior house wall.
Yeah, years ago we let him practice on the side of the house [laughing]. I always remember Isaac and I in a bar overhearing people talking about us saying our house looked like a tenement yard because of the graffiti on the side. And I so wanted to go up to them and say, ‘actually I’m just trying to encourage some creativity’. But Isaac wouldn’t let me. He’s always the one who stops me!

We need those people!
He stops me from lashing out, which is probably wise. But yes, Josh, is really artistic but sports wise, I wish Joshua and Luca could have chosen chess! They both have chosen such dangerous sports. I can’t watch either!

Tell us Scarlett likes baking, at least?!
Horse riding which is another terrifying sport [laughing]!

Don’t have children is the motto!
Or if you do, just encourage them into chess!

We remember when Scarlett was a cute 7-year-old…
She’s in first year now! She’s settling well in the local school. She’s very into the social side of things, friends are everything.

Like mother, like daughter! It’s been six years since your last cookbook, why so long?
I knew I needed to have a bit of a break. Life was really hectic. I sometimes feel like I brought this whole virus on! I remember sitting in a car, going to the airport, again, for the second time in a week and I remember actually saying, sometimes I wish I could just stop and jump off the hamster wheel. And then the world did stop.

Coming up with new ideas all the time is exhausting too…
It can be. But writing on a specific theme, like soups, I really enjoyed. I have been eating, drinking and sleeping soups and broths and breads for months now! I’m really proud of this book.

Talk to us about how the Ballymaloe Cookery School pivoted in Covid…
The house did close for all the lockdown but the farm and the cookery school stayed cooking for the shop where we sell readymade food, soups, stews. We also did virtual cookalongs which were so much fun. We’d have about 25 people on the screen and I’d be able to interact them with them all virtually, it was really great. Generally we held them at 5pm which would be the morning time for the States so we had people from all over the world.

Have International travellers started to return to Ballymaloe yet? And are supports needed for the hospitality sector?
International travellers are slowly returning but it’s really tough, especially for small independent restaurants or cafes. I don’t know how they’re surviving. And if restrictions come in again… I just do not know…

You turned 50th on the 11th of October. How was it?
I don’t have a big problem with ageing, I think it’s a privilege to get this far. I had a great time with Isaac and a few friends and then my girlfriends took me out for a night, it was great.

Let’s talk about Christmas at at the Allen’s. What happens, who cooks and what do you eat?
I don’t know what’s going to be happening this year because of Covid. Normally we have a really big Christmas, there could be 50 or 60 of us, sometimes my family join as well. But we just don’t know yet… Who does the cooking? Issac and I usually do it between us and it’s usually very traditional.

Do you have any special traditions?
The last few years with a couple of friends I’ve gone on a wreath making day, which has been gorgeous. In terms of putting the tree up it’s generally arguments about whether it’s straight or not! I love to put on some Rat Pack Christmas music, have a glass of something and then it always turns out not the way I planned where it’s me saying, Isaac the tree is crooked, and he’s lying on his back trying to straighten it, telling me it is!

Are you a traditionalist when it comes to decorations?
Years ago I used to love going for white and gold. Then I was on way back from London and in John Lewis in Heathrow airport I saw these really colourful Peruvian decorations with lots colourful pom poms and jingly bells and I thought, oh this has sparked a bit of joy in me. So it’s a mix of these and lots of old Christmas decorations that the kids made in school. It’s never a masterpiece but it’s homely.

Are the boys to cool or do they still get involved?
They tend to get involved when I need a hand! But while they won’t say it, I know they like it! Like if the tree wasn’t there I’d hear about it then!

What’s your tablescaping style?
I tend to go very natural. I love branches with berries, if the birds haven’t eaten them. I love hyacinths in pots too. Having said that this Christmas we’ll be out of our house, we’re just moving at the moment into a temporary house while we build our new one which is still on this farm but just a little further down.

Why the move?
We decided one evening while Isaac and I were having a glass of wine and then I got carried away with Pinterest! I love house design and wanted a bit of change.

For a change we’re thinking of a soup starter for Christmas Day, what would you advise?
Ooh…such a good idea to do a soup starter for Christmas because you can make it in advance and freeze it. You could do potato soup with parsley, pesto and chorizo, which just happens to be in my new book! Or, if you want something with a little bit of spicy, a cauliflower and cashew soup with coriander or a simple celery and nutmeg soup (you will find these all and lots more besides in her new book, Soup, Broth and Bread). 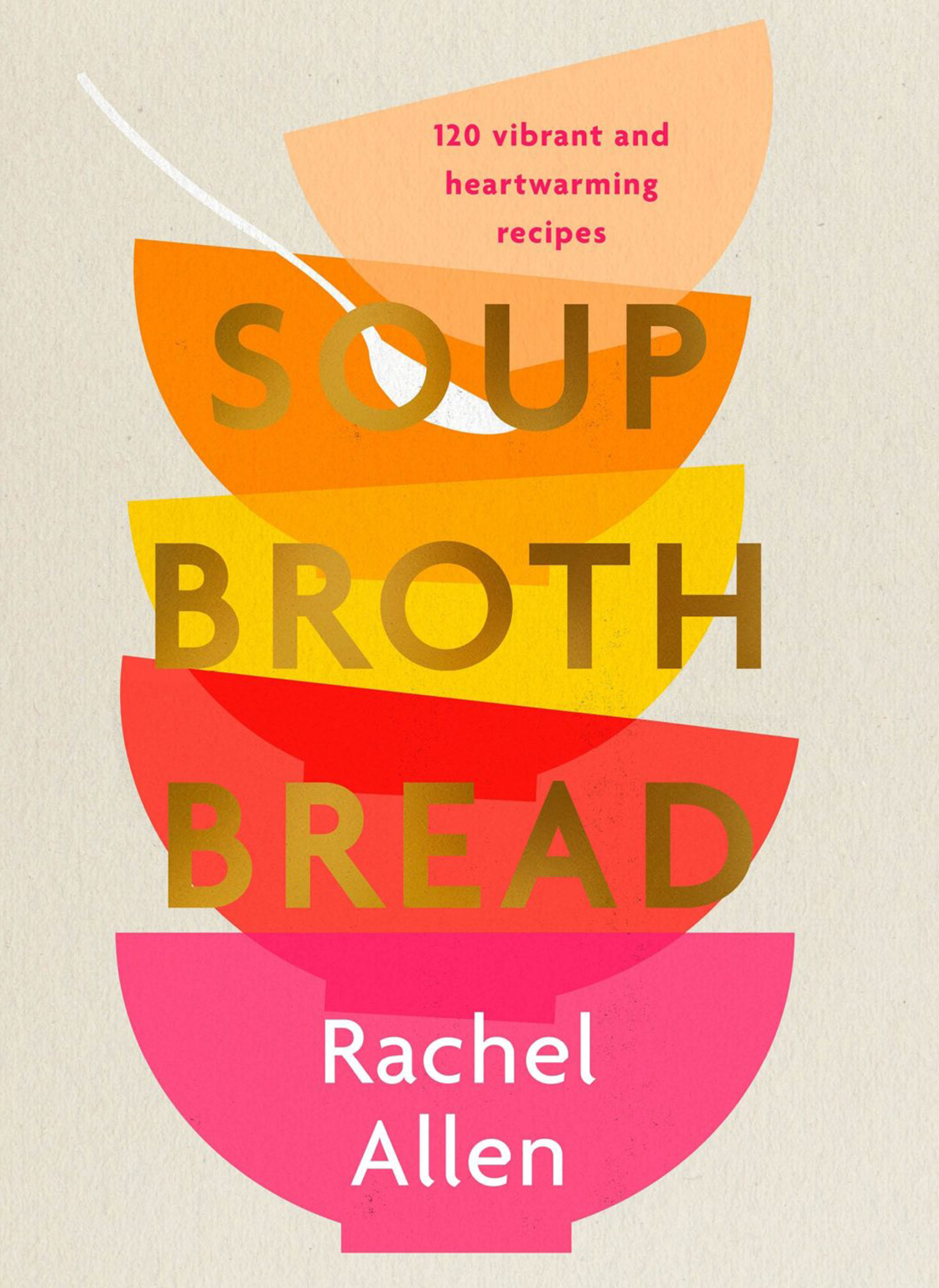 Soup, Broth, Bread by Rachel Allen, priced at €26, is out now

Thanks to Louise Farrell. Bianca meets Dave Fanning; “I can’t even think about the possibility of one day having to give up work. I panic at the thought.” 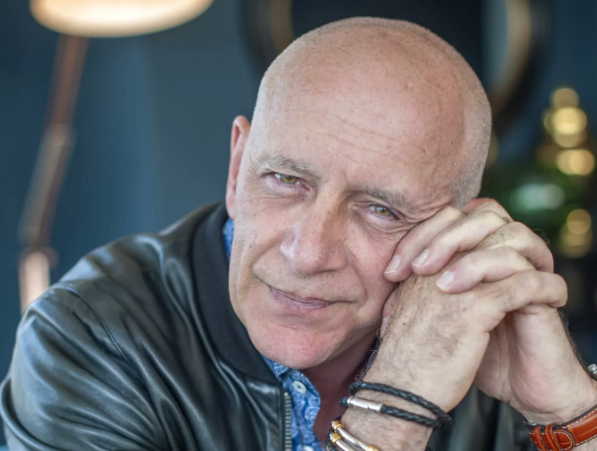