The stunning 30-year-old, best known for her regular slots on RTE’S Today Show, married her musical beau back in June in what was a boho themed celebration, at the uniquely beautiful Kippure Estate in Blessington.

Following the gorgeous ceremony, VIP caught up with Blathnaid to talk about the wedding, honeymoon and life as a newlywed.

Bláthnaid, your honeymoon looked incredible. Was it a total dream? It looked that way from the pics!
It was my favourite holiday that I’ve ever been on. It was so beautiful, it’s like there are thousands of different shades of blue in Greece. We got to travel to four islands, and it felt like we were there for a lot longer than we were, in a good way! 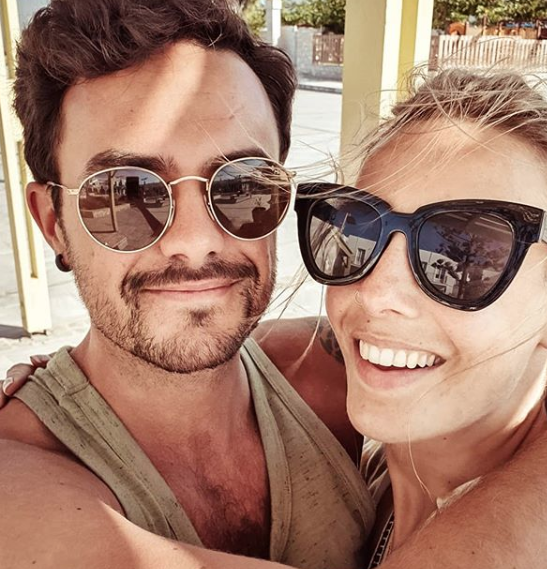 Go on, make us sick with envy and tell us the highlights from your trip?
My highlight was Santorini. It was just perfect. I don’t know what it was about that place; it’s just the vibe. When we were collected from the ferry our driver from our hotel said Santorini is magical and we didn’t quite believe him. But towards the end of our stay we realised he was right; there is just something truly magical about that place.

How does it feel, now that time has passed and it’s really sunk in, to call Charlie your husband?
It’s funny calling him my husband, it feels weird as we’ve been together for so long as boyfriend and girlfriend. Getting married has solidified our relationship even though the relationship itself hasn’t changed. It’s comforting to be able to call him my husband.

Now that you’re back to reality, is it a bit sad that all the wedding fun is over?!
No, it’s not sad, it was loads of fun organising it but I’m glad that it’s all done because you have to juggle a lot of balls at once. My brother is getting married in December and I’m giving them a bit of a hand organising stuff, so I think deep down I’m a little bit of an event organiser.

You’ve a lot coming up to keep you busy though; currently we’re chatting to you at the programme launch of Galway 2020, European Capital of Culture. What can people look forward to?
This is such an important year for Galway and indeed for Ireland, so I’m thrilled to be an ambassador. Galway 2020 European Capital of Culture is a very special pan-European programme which features over 1,900 events in venues and unexpected locations right across the county. From music and dance, to poetry, theatre and visual art there really is something for everyone on a scale we’ve never seen here in Ireland before. It’s right on our doorstep so there really is no excuse…

You grew up in Bray and live in Dublin. What do you make of the recent claims of Dublin losing some of its culture, with the closure of places like The Bernard Shaw and with lots of new hotels opening?
I was really sad to hear about the closure of Bernard Shaw, I’ve been in there so many times, not only because it’s a music venue and bar but because they put on loads of events like a flea market and so much more. High rents and insurance premiums are battles faced by venues on a daily basis in Dublin and across the country, but I think art and culture will always prevail. After all we’re known as a country of poets and scholars and we still are, but maybe in new and modern ways! We’ve got so many rappers especially coming out of Dublin and loads of exciting graffiti artists – real urban art which isn’t going anywhere anytime soon.

Speaking of culture, with Charlie being a jazz musician, we imagine you both live very cool lives at jazz gigs, sipping whiskey….
I’d be found sipping Prosecco but Charlie does enjoy the whiskey. Charlie’s entire network of friends outside of our own mutual friends
are all musicians, so, there’s always a gig happening somewhere. JJ Smiths used to be a huge jazz venue but unfortunately it is no more, so we’re kind of running out of places to go to in Dublin but we do travel to the Cork Jazz Festival and to New York every year to get a proper jazz fix.