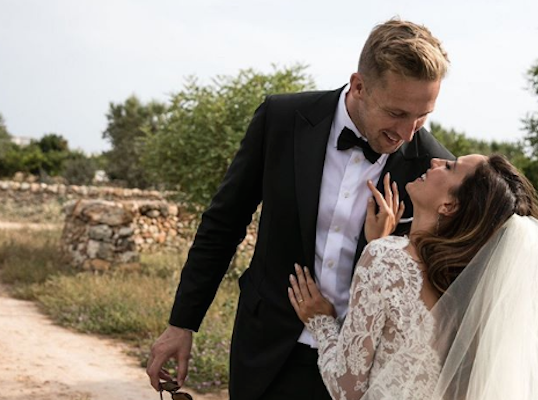 Nadia Forde has revealed the sweetest moment from her Italian wedding.

The Irish actress tied the knot with Dominic Day during a romantic ceremony in Puglia earlier this summer.

The pair were joined by a number of their closest friends, family and a few celebrity guests, as they became husband and wife.

“I like using that word – husband,” Nadia says with a laugh.

Nadia and Dom, who have a beautiful little girl together named Wyatt, were sure to include her in the ceremony, and admit having her there on their wedding, was a special moment for them both.

Speaking to VIP Magazine, Nadia told us, “She was part of our big day. I wouldn’t have it any other way.

“That was one of Dom’s highlights of the day, seeing her coming down the aisle. He lost it. It was really sweet.”

Gushing over their little girl, she continued, “We love her and love hanging out with her. She’s great fun.”

Nadia, who has been based in the UK for the last while, returned to Dublin yesterday after to launch TKMaxx’s Give up Your Clothes for Good campaign.

The initiative, in support of Enable Ireland, encourages people all over the country to donate pre-loved, quality clothes, accessories and homeware to raise funds to support vital services for children and young people with disabilities.

Simply pack a bag, and drop in into your local TXMaxx store.