Fans were stunned to learn that Jenny Dixon’s character Kerri-Ann was revealed as Karen’s killer during last night’s episode of Fair City.

Weeks after the shocking death which saw Karen stabbed and left to die, Kerri-Ann was outed as the murderer after viewers saw her clutch the weapon.

The actress admitted while it was tough, she enjoyed being a part of the massive whodunnit storyline.

Speaking to VIP Magazine, Jenny said, “We shot a lot of episodes and a lot of heavy drama. I finished that block last week.

“It’s been the most intense story that I’ve shot. We’ve had twelve hour days for the last few weeks.”

Our sister publication TVNow Magazine have a full interview with Jenny Dixon, on sale Monday. 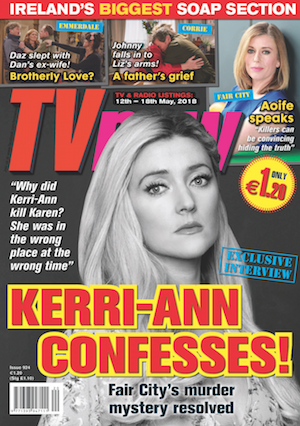