Dancing with the Stars was a little different this week, as it was ‘Dedicated Dance Night’ which saw each celeb select their music very carefully as they dedicated their performance to someone special in their lives. As well as this, there was no elimination on the show, meaning we will see all of our couples back on the dance floor next week.

Also, Irish model and influencer Missy Keating was not on Sunday night’s show as she revealed earlier in the week that she had tested positive for Covid, but here’s hoping she’ll be back and fighting fit for this weekend!

First out on the floor this week was Nina Carberry and pro-dancer Pasquale La Rocca who danced an energetic salsa to ‘Starships’ by Nicki Minaj. The Irish jockey dedicated her performance to her two daughters, Rosie and Holly and scored a 24 from the judges.

She said; “I really enjoyed it and I thought it went really well, I can’t wait to go home and watch it with the girls. I never thought I’d make it to week 6.”

Next out was Aslan’s Billy McGuinness and Hannah Kelly who danced to one of his own hits, ‘Crazy World.’ Their special contemporary ballroom dance scored them a 17 from the judges and Billy dedicated their performance to his bandmate, Christy Dignam.

He shared an emotional tribute to his friend of over 40 years saying; “It was so emotional dancing for Christy. I will have an experience like that again in my life.” 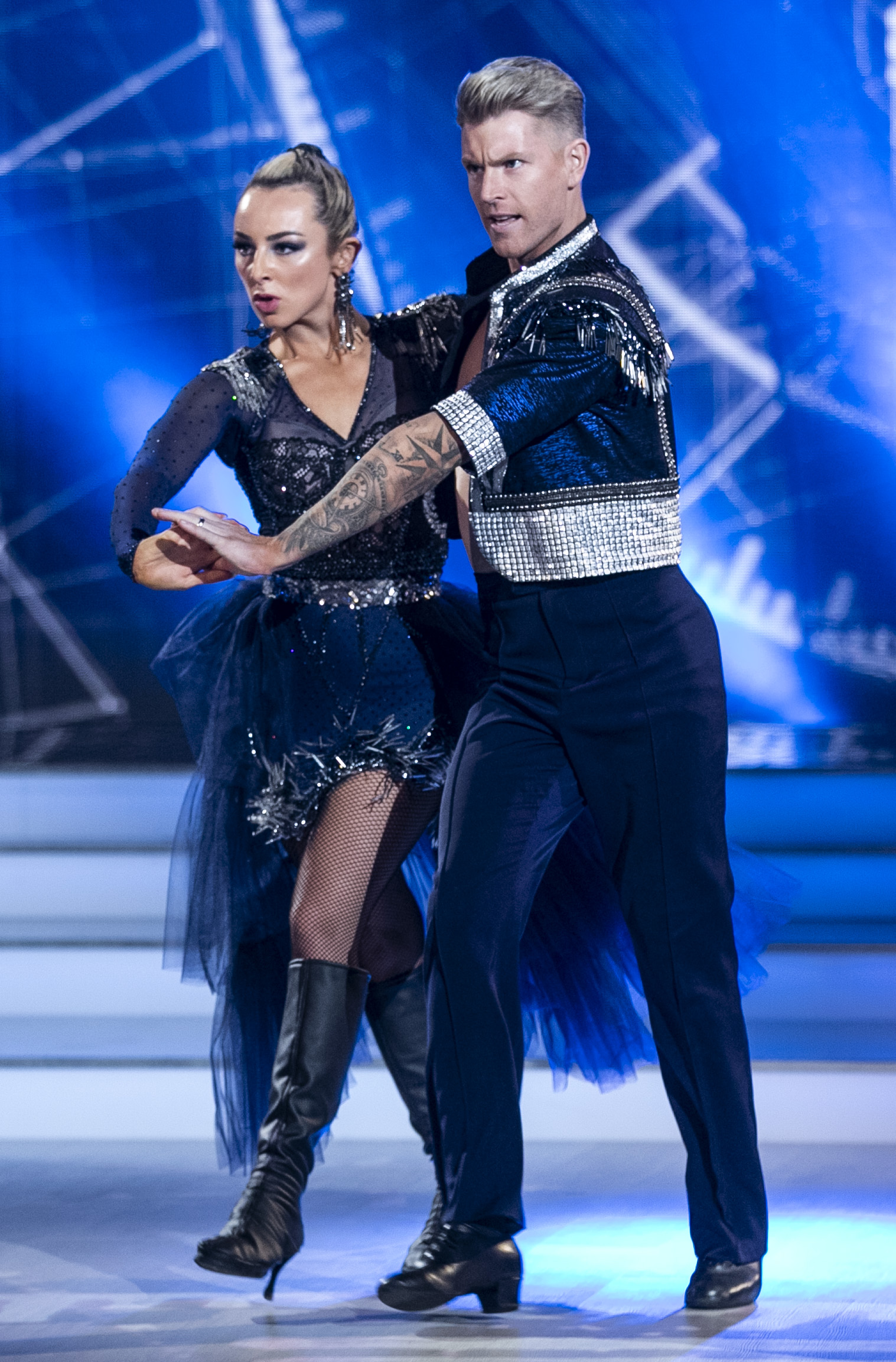 Third out on the floor was Paralympic gold medal winner Ellen Keane and professional dancer, Stephen Vincent. She dedicated their paso doble to her best friend, Aisling Byrne who she hasn’t been able to see in three years but is always supporting her from Sydney, Australia.

They danced to Beyoncé’s ‘Run the World (Girls)’ which scored the pair a 28, with Ellen’s first 10 on the show coming from judge, Arthur. Speaking about her friend she said; “I think it was so important to dance to Run the World as she’s fierce (her friend Aisling). When I’m feeling down, she’s always there for me, even all the way from Sydney.”

Next we saw TV presenter Gráinne Seoige and John Nolan hit the floor with a samba to Toto’s ‘Africa’ which scored them a 17 with the judges. Gráinne dedicated the performance to her husband, Leon’s nationality as he watches from home; “I had a ball. Leon’s been at every show this series, but this week he got covid and unfortunately, that’s just the world we are living in.”

She also spoke about how living in South Africa was a life-changing experience for her; “Isn’t that what’s great about life? To move to the other side of the world and learn a new culture and new language. It’s so good for you to do that.”

Jordan Conroy was out next and he dedicated his performance to his Man, Jennie who he shared raised two children as a single mother. Dancing an emotion foxtrot to ‘Isn’t She Lovely’ by Stevie Wonder, Joran and pro-dance Salome Chachua scored a 19 from the judges.

After the performance, the rugby star presented his mother, who was in the audience, with a bunch of flowers and said; “It’s been a long tough road, but for me, it’s now more of a celebration. It was hard not to cry at the beginning. You’ve got to celebrate. It’s more of a celebration than a sob story. A little big of nerves, it’s my mammy so I’ll always be a little boy at heart.”

Pro cyclist, Nicola Roche was next on the dance floor with professional dancer, Karen Byrne. Nicola dedicated his quickstep performance to Avicci’s ‘Hey Brother’ to his brother, Alexis. He shared that in 2008 Alexis donated his bone marrow to their other brother, Florian, as he battled leukaemia.

The pair scored a 19 from the judges and Nicolas said; “I felt a lot of pressure, it’s been a tough rehearsal. The person who you dedicated your song to, is here all the way from France. You don’t want to mess it up! I thought it was quite emotional to dedicate the dance to my bother who saved my other brothers life.”

Singer, Erica Cody dedicated her tango to her icon and childhood inspiration, Samantha Mumba sharing that she helped her to realise growing up that she too, could be a singer. Erica and pro-dancer, Denys Samson performed their tango to Samantha’s iconic hit, ‘Body II Body’ and scored a 20 from the judges.

An emotional Erica Cody said; “You can’t help but feel empowered when you have someone in your corner, who looks like you and tells you, you can do anything. It’s a real full circle for me, to do that for Samantha when she did it for me growing up. It’s such a journey, I’m really giving it my all.”

The final pair to dance on Sunday night was Love Island’s Matthew MacNabb and professional dancer, Laura Nolan. Matthew dedicated their performance to his close friend, Ryan who passed away last summer just days before he entered the Love Island villa. They danced a contemporary ballroom dance to ‘See You Again’ by Charlie Puth.

An emotional Matthew shared; “We had such special memories, he was such a special person. I was in Love Island quarantine when he passed away so I wasn’t able to go to his funeral so this was my dedication to him.”

Matthew and Laura scored a 26 from the judges which, when combined with the public vote, made them top of the leaderboard. The twist on Sunday night’s show was that whichever couple scored highest would have a free pass from next week’s first dreaded dance-off of series 5, fast-tracking Big Band Orchestra week which takes place in two weeks’ time.