The final of Dancing with the Stars is inching ever closer, which is making each week’s episode more and more nail-biting to watch! Last night’s episode was the ninth show of the season and saw our celebrity couples battling it out to make it into the quarter-final next week.

First out on the dance floor was Love Island’s Matthew MacNabb and professional dancer, Laura Nolan. The pair danced an American Smooth to ‘Anyone for You’ by George Ezra which scored them a 22 from the judges.

Judge, Arthur said about their performance; “The chemistry between you two is flowing, I think you two are perfect for each other. Who’s have thought you’d have been here for week 9? I really enjoyed the lovely, gentle American Smooth.”

Brian added; “You look happier this week, I don’t know is it the smell of the flowers or what it is. Frame is improving week by week, some of the lifts need work, but not a bad start for an American Smooth.”

Jockey, Nina Carberry and Pasquale La Rocca were up next off the back of two straight weeks of scoring 30! The pair performed a 60’s inspired jive to ‘Faith’ by Stevie Wonder feat. Ariana Grande which scored them a still impressive 26 from the judges.

Arthur raved about their performance;  “Nina you are making things very difficult for me, I’m running out of words in my English vocabulary. Jive was outstanding.”

Brian Redmond added; “Two weeks of top scores, but this week proves, no one can be perfect all the time. You needed snappier leg action. Plenty of faith you’ll be back next week, but not as good as last week.”

After being absent from the show last week due to testing positive from Covid, cyclist Nicolas Roche, was back on the dance floor. Nicolas and Karen danced a tango to Trumpet Tango by Eddie Calvert which was pre-recorded by the RTÉ Concert Orchestra as they missed Big Band week and it scored them a 21 from the judges.

Brian said;  “After two weeks of you two hardly seeing each other, I was very impressed, I commend you. One of your strongest performances. I loved the top line, spine was a bit titled, a bit forward, but considering, you hardly danced together, that was great.”

Head judge Loraine added;  “A Sleek, stylish tango. Mystery and intrigue. I love to see the original steps which you showed. I would have loved a bit more punch in the steps but I really enjoyed it.”

Ellen Keane and pro-dancer Stephen Vincent entertained us next with a vibrant quickstep to ‘Walking on Sunshine’ by Katrina and the Waves. Their energetic performance earned them a 27 from the judges.

Loraine shared; “Well, coming off last week where the jive was fast, it led you into the quickstep. You started with swing action, quarter turns, The lock step. You kept the energy when you broke away. So light on your feet.”

Arthur added;  “You are a ray of sunshine. This song was so uplifting. Fast, energic and perfect for both of you. You have to be on the same level as your partner, with pace, and you worked it out.” 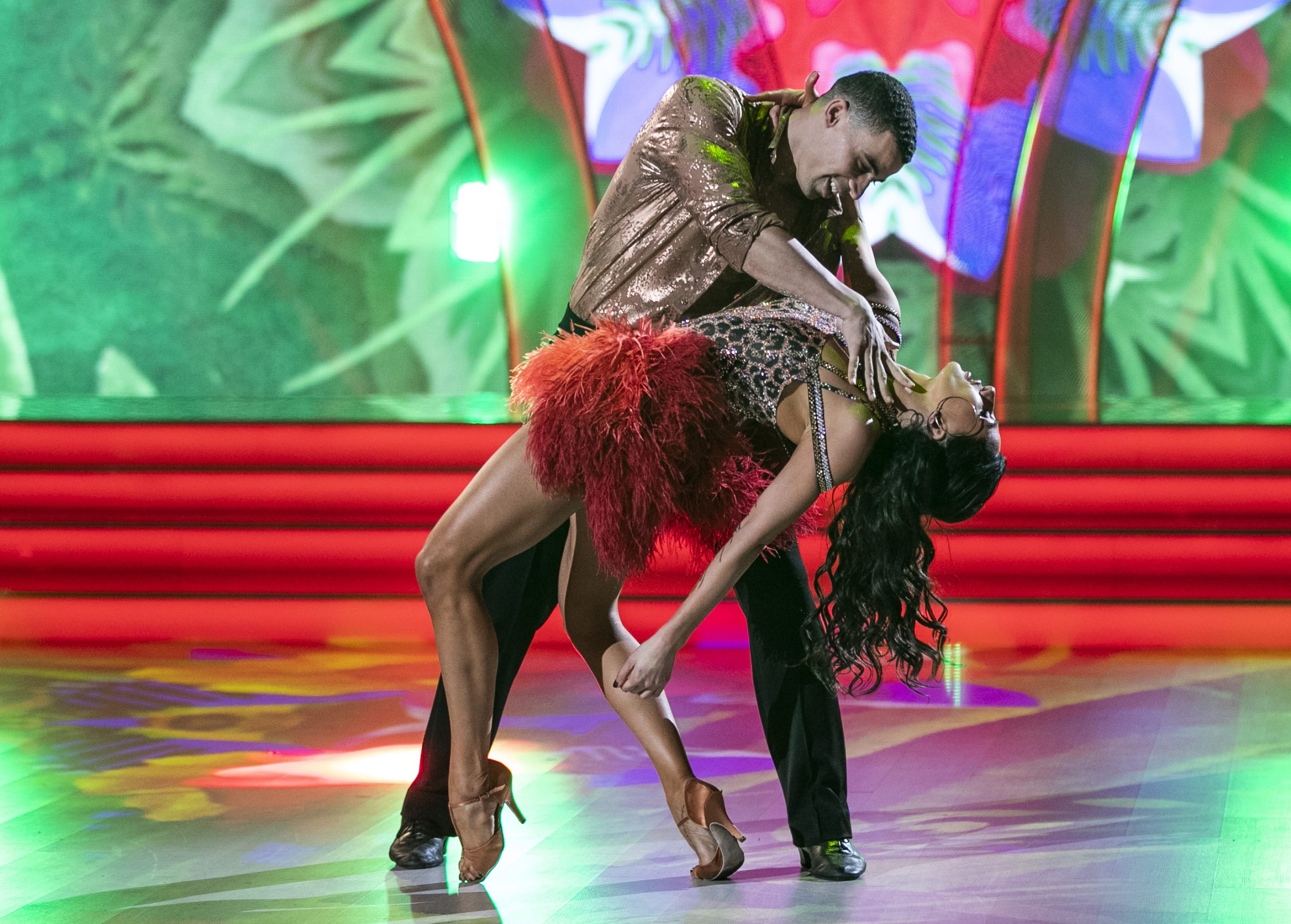 Rugby sevens star Jordan Conroy was up next with his professional partner Salome Chachua, they danced a samba to ‘Magalenha’ by Sergio Mendas. Their performance scored them a 24 from the judges but the pair did end up in the bottom two dance off this week.

Arthur said;  “The way you were grinding the floor at beginning, I thought I was at a Magic Mike show. You had a point to prove tonight. Your hunger and love for dancing shows . You were loose and supple and you had by the bucketload.”

Brian added; “So many rhythms. Lovely and full, real action in the body, but no one invited your arms to the party. Arms not quite there. I also liked the changes in rhythm. Maybe not as good as last week and last week you were in the dance off.”

Aslan’s Billy McGuinness reached the end of his Dancing with the Stars journey last night as after ending up in the dance-off he was ultimately sent home by the judges. With his professional dance partner, Hannah Kelly they danced a Charleston to ‘Mr Bass Man’ which scored them a 20 from the judges.

Speaking about his experience on the show he said;  “I expected to last one week, two maybe, If we made people at home smile. That’s my job done. I just loved being on this show. Hair, make up, all the crew. It’s been more than I expected. Hannah had guided me through the 9 weeks. I hope she goes far.”

The final performance last night was from Erica Cody, who was partnered up with Ervinas Merfeldas this week as her pro-partner Denys Samson tested positive for Covid-19. THe pair wowed the judges with their emotional contemporary ballroom to ‘Rise Up’ by Andra Day.

The dance scored them an impressive 29 from the judges and Erica dedicated the performance to Denys saying that she hope she made him proud.

Loraine said; “ That was absolutely beautiful, maximum amount of stretching. The fluidity. The Viennese Waltz in there. You absolutely did Denys proud.”

Brian added; “First of all, the way you dealt with the change. That was a testament to all you have learnt so far and to Denys’ choreography. Head position a little weird I some places, but I loved it.”