This weekend we were once again treated to another night of glitz and glamour as 11 celebrities took to the dance floor for the fifth season of Dancing with the Stars. The theme this week was a viewer favourite, as it was movie week with each song and performance based off a popular film.

Also, returning to the show this week was host, Jennifer Zamparelli after she had been out for the previous show with Covid-19. We loved seeing Lottie Ryan filling in for her last week, but were delighted to see Jennifer and Nicky take the reins again on Sunday night.

First out on the dance floor was Love Island star Matthew MacNabb and his partner, Laura Nolan. They danced a foxtrot to You Got A Friend In Me from Toy Story and scored a 17 from the judges.

Loraine’s feedback on his performance was positive; “You definitely have a friend in me tonight, and that is because I’m impressed!” as was Arthur’s; “You brought life to this dance tonight.”

Brian Redmond made reference to his costume on the night as he critiqued the dance; “Your dancing for the last few weeks has been pretty wooden, here you are dressed as Woody, finally moving with a bit of fluidity.”

Irish jockey Nina Carberry wowed judges last week as she topped the leaderboard, and she impressed them again on Sunday night. She took to the floor with her partner, Pasquale La Rocca and they performed a tango to U2’s Elevation from the movie, Tomb Raider which scored them a 19.

Sharing their delight Arthur said; “Is there anything you can’t do, seriously? Another amazing night for our Nina” and Brian said; “Good characterisation, it didn’t overtake the dancing, I loved that.”

Loraine had some critique for the dance saying; “I felt the tango became too in, too compact. For me it was just a little bit empty.”

Next to hit the floor was Paralympian, Ellen Keane and pro-dancer, Stephen Vincent. The pair performed a samba along with The Little Mermaid’s Under The Sea which scored them 22 points.

Brian loved their performance saying; “Well this little Mermaid certainly made a samba splash this evening”and Loraine said; “That was a loaded samba…everything was there, you did a really good job.”

Aslan’s Billy McGuinness rocked out on the dance floor with a paso doble to Journey’s Any Want You Want It from the film, Rock of Ages. Billy and his partner, professional dancer Hannah Kelly scored a 14 from the judges.

Commenting on their performance Loraine said; “I know you are working hard, but we need more characterisation now” and Arthur was praised them saying; “You came on the dancefloor like a true rockstar. Overall, great entertainment.” 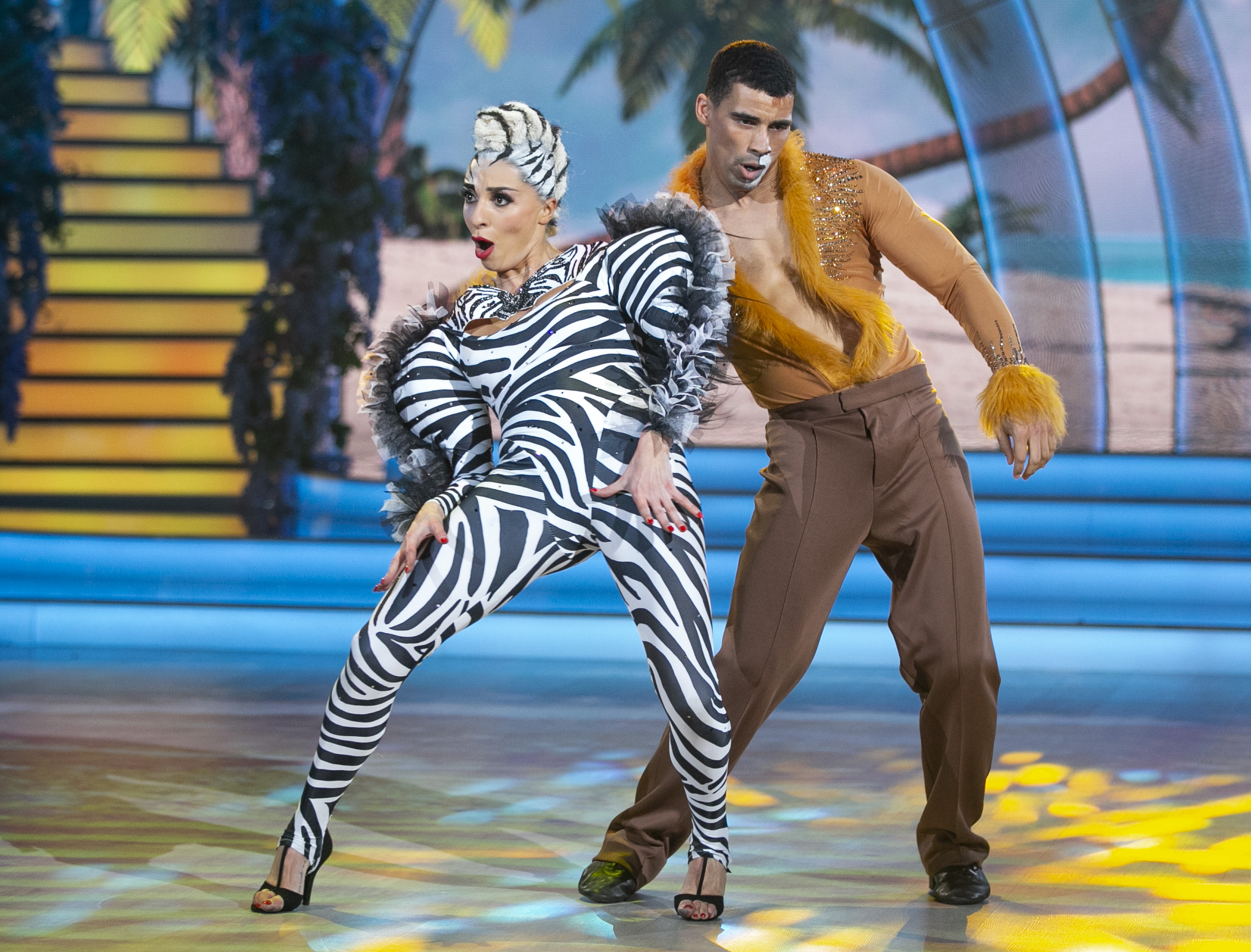 Next out on the floor was rugby star, Jordan Conroy who once again entertained with an energetic performance. Jordan and his partner, Salome Chachua danced a cha-cha-cha to I Like to Move it from Madagascar which earned them 20 points.

Arthur shared; “You are a big ball of energy every single week” and Loraine was also full of praise;”It’s playful, it’s flamboyant, it’s cheeky.”

Brian however had some criticism for their performance; “Hips as wooden as that crate over there, but…great showmanship again.”

Missy Keating and her partner, professional dancer, Ervinas Merfeldas were next out on the floor as they danced to the song Running with the Wolves fro, animated Irish film, Wolfwalkers. The pair performed a contemporary ballroom dance to the track which scored them a 24 with the judges.

Brian commented; “A little bit still to do, but for me this evening, Wolfwalker moving up the leaderboard.”

Arthur was delighted with their performance;  “Missy, this is what I’m talking about baby. It was mesmerising, you are technically on point.”

Next out was TV presenter, Gráinne Seoige and pro-dancer John Nolan, who danced a rumba to Bond theme tune Diamonds are Forever by Shirley Bassey. Gráinne, who revealed she’d sustained a quad injury this week, scored a 13 with the judges.

Also with some critique for the star was Loraine who said; “My question is, is the injury stopping you from releasing the hips? That’s what’s missing here.”

On Sunday night we saw the second couple eliminated from this year’s Dancing with the Stars. Irish comedian Neil Delamere and pro-dancer, Kylee Vincent were sent home after their judges score, pooled with the public vote was not enough to keep them in the competition.

The pair danced a lively and upbeat cha-cha-cha to the Ghostbusters theme song for movie week which earned them 18 points from the judges. Giving feedback after their performance Arthur said; “That was so much fun” and Loraine; “I like it. You put yourself into it.”

Brian Redmond said; “Well there’s one thing strange in this neighbourhood and it’s that hip action. A little bit more subtlety and you probably would be there.”

Newsreader, Aengus Mac Grainna paid homage to that hilarious viral video of himself in the spirit of Anchorman’s Ron Burgandy. Joined by pro-dancer Emily Barker on the floor they danced a lively samba to Help Yourself by Tom Jones which scored them an 11 with the judges.

Giving them feedback afterwards Brian said; “This show is all about embracing stuff that’s outside of your comfort zone, I don’t think the nation could ever have expected that.”

Loraine added; “I’ve no doubt you worked very very hard on that! It’s not quite up there with the others.”

Then we had some old school glamour on the floor as cyclist, Nicola Roche danced an American smooth to Singin’ in the Rain. Nicolas and pro-dancer, Karen Byrne scored a 19 from the judges for their performance.

Loraine shared;  “Well they say style lasts forever and I think this performance will stay with you forever.” and Arthur too was full of positive feedback;  “Who are you, and what have you done with Nicolas? You are the definition of practice makes perfect.” 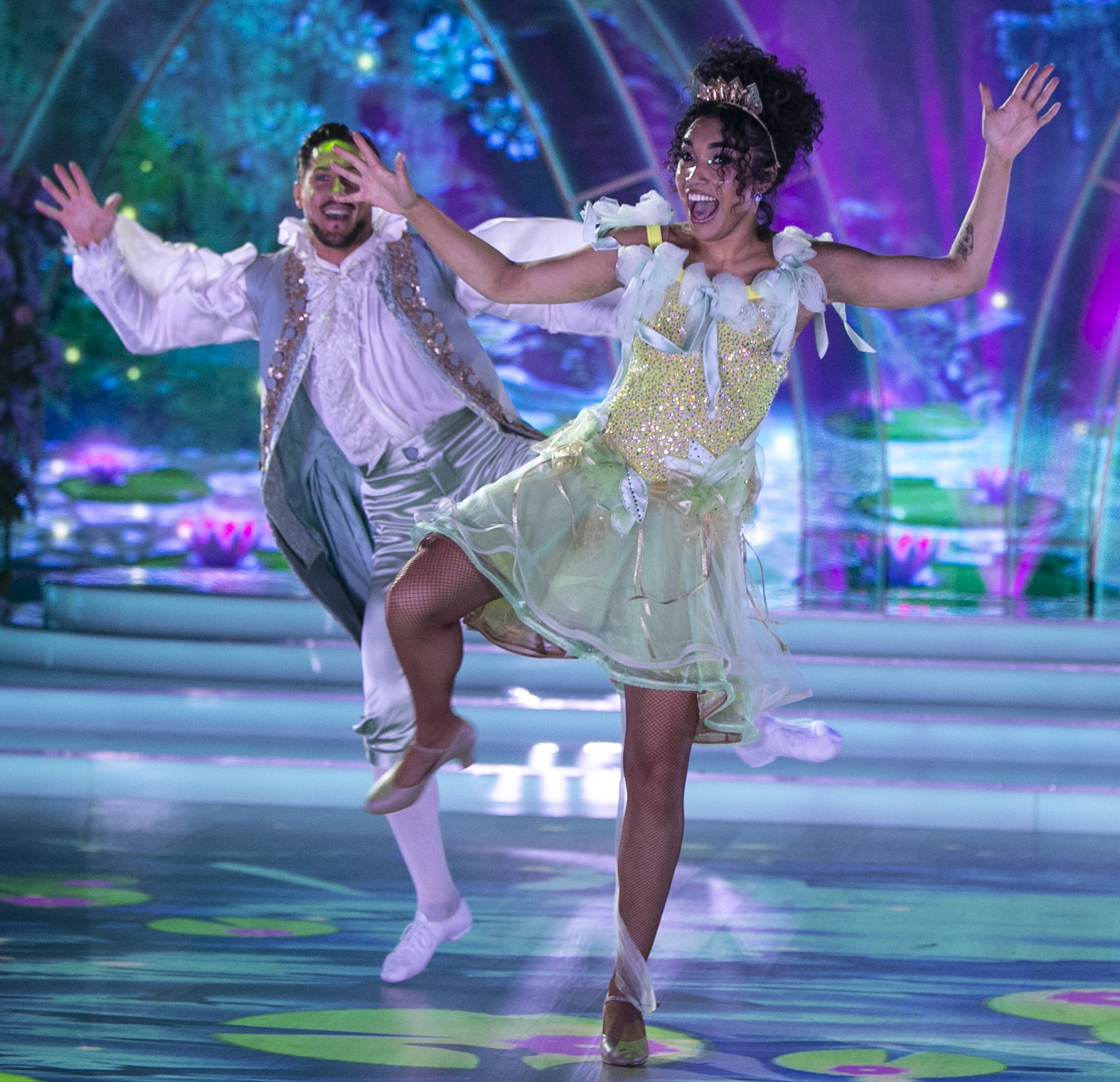 Last but not least to hit the floor was singer Erica Cody and professional dancer, Denys Samson. The pair danced a lively charleston to When We’re Human from one of Erica’s favourote films, The Princess and the Frog.

The pair scored a whopping 28 points over all as well as scoring the very first 10 of the season!

Arthur commented; “Erica, this was so beautifully presented and not only for you, for every single girl and boy who will be inspired by you after that performance.”

Loraine added; “It was really good, this is what you call show business.”