The Fair City actress previously spent summers at the Playboy Mansion where she became close friends with Hugh and co.

The actress was working as a school teacher when she first travelled over for a party in 2009.

She took to social media today to recall her time with Hugh.

“The parties, the smiles, the people I was blessed to meet (more than I can attempt to mention), your beautiful family, Crystal, Cooper, the Mansion staff, your charisma, your energy, your generosity, your spirit.

“A kind soul with a zest for life. It was a great pleasure to have met you, an honour, for the experiences.. ThankYou #HughHefner Thoughts and prayers sent.”

Back in 2011, Jenny told the Independent what is was like meeting the Playboy mogul.

“I thought to Hugh I’d just be blonde number 2,074, but he’s lovely. The first thing you notice about him is his smile — it goes from ear to ear. In photos he puts his arm around you and gives you a hug, but it’s more of an uncle vibe off him; he’s very tongue in cheek.”

Describing the infamous Playboy mansion, Jenny said “It’s like a wonderland for adults.”

She added: “The trampolining, the hoola hooping, all the clichés are there. The grounds are manicured to the hilt, with exotic birds and peacocks roaming around. Inside, it’s all plush gold and marble, and everywhere smells of the food prepared on-site by the chefs.”

“On one occasion there was a ‘Charlie and the Chocolate Factory’ theme, with candy everywhere and little people dressed as Oompa-Loompas. Everywhere you look there are eight-tier cakestands with handmade cakes and platters of delicious appetisers. There’s no expense spared and a dollar never crosses the bar.” 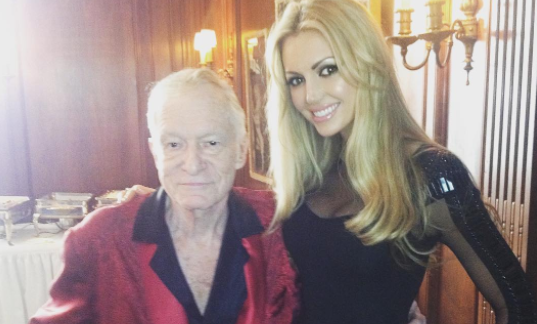