Adam King has been inundated with kind words of support and encouragement following a recent accident which resulted in a femur fracture.

The youngster, who stole the hearts of the nation during his appearance on the Late Late Toy Show last year, injured his thigh bone a few weeks ago, but thankfully didn’t need to go under the knife to repair the damage.

“This is the 5th femur fracture Adam has had and it is probably the most positive outcome as he didn’t require surgery,” his parents recently revealed.

“He already had a rod in his leg which held the fractured bone in place. Hopefully he will have the cast off in 4 weeks and will be ready for road again!”

While he’s been at home resting and recuperating, hundreds of people across the country have sent him ‘virtual hugs’ and beautiful cards, filled with well-wishes. 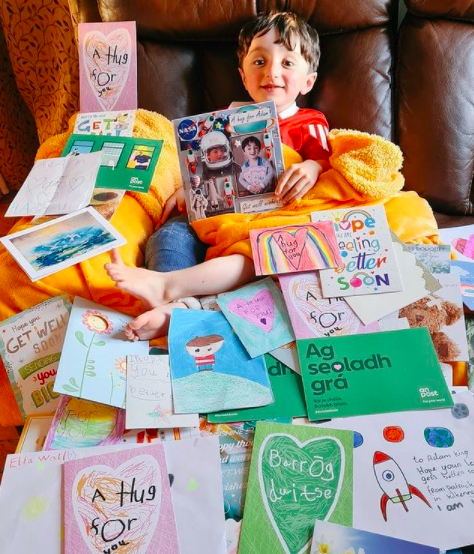 “Since the Toy Show so many people have reached out and told us how it feels to get a Virtual Hug from a friend or loved one. Well, this week, we *really* felt it – and it means so much,” his parents stated.

“So many of you reached out with messages, calls and cards to say you wanted to give a Virtual Hug back to Adam – This isn’t even all the cards!

“Adam has read every single one of your cards and messages with a big smile. It has meant an awful lot to Adam and our family. For all the love and all the Hugs – thank you.”

We wish Adam a speedy recovery!